The ESMERA team participated in the first virtual edition of the Global Robot Expo. On October 20th and 21st, ESMERA had two booths at the fair presenting some of their most promising experiments from the first and second Open Call. With great technology in the background, interested people were able to meet with the consortium, exchange and communicate almost like in a real-life setting. 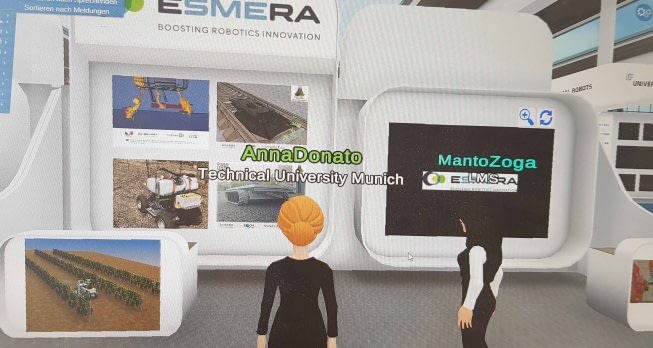 Due to the Covid-19 restrictions for travel and especially larger group assemblies such as trade fairs and conferences, the Global Robot Expo, initially planned for April 2020 in Madrid, moved to virtual. The ESMERA team was present with two booths directly next to each other presenting some of our experiments. REFLECT, Wire Cobots, Nix, equals, Rover4RT and iRTA attended the virtual event. Interested contacts could get to know our experiments by watching their images and videos on our booth´s screens or meeting representatives by their avatars “in person”.