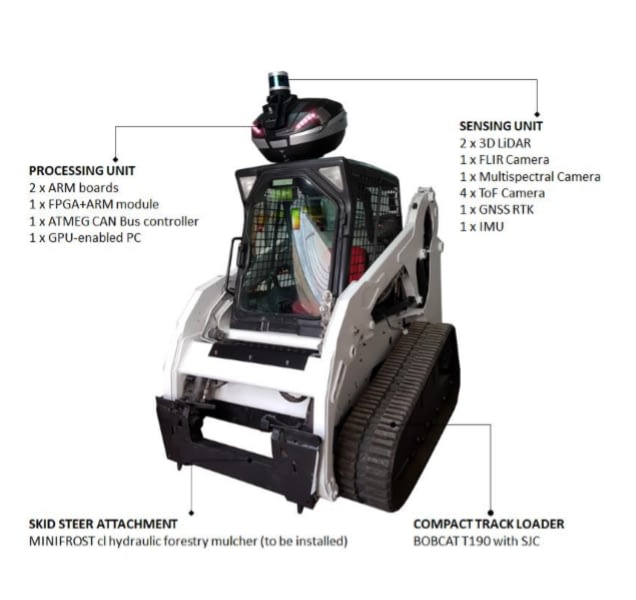 Railway Autonomous Inspection and Landscape Operations with RoBOTs, or RAIL-O-BOT for short, paves the way towards a new generation of affordable field heavy-duty robots, prioritizing the research and technological developments within the domain of vegetation management in railways.

The developed technology aims for progressively lower system costs by using an in-house automatized commercial-off-the-shelf compact track loader, denoted as Ranger, rather than a fully-built custom robot. The Ranger has been designed as a forestry mulcher for autonomous vegetation management, endowed with motion ability, including positioning and navigation in harsh environments, and perception ability, including an innovative artificial perception architecture to identify forest fuel.

RAIL-O-BOT goes beyond the state of the art by augmenting these features under three domains:

i) develop a decision-making architecture based on finite-state machines to fulfil pre-planned railway vegetation management missions under limited human supervision.

ii) extend the existing artificial perception architecture based on semantic segmentation Convolutional Neural Networks to continuously monitor the state of vegetation along railways, identifying the need for maintenance actions while keeping track of biodiversity.

iii) implement a human-machine interaction architecture with flow-management to ease integration with human operators as an aid to provide mission expertise.

The impact of the proposed robotic system will be assessed through a series of key performance indicators, tackling its motion ability (localization and navigation while withstanding the suction effect of fast-moving trains), perception ability (identification of the vegetation and its biodiversity), manipulation ability (reduction/removal of unwanted vegetation) and decisional autonomy (overall performance with human-in-the-loop).